As many as forty-five percent of adults report occasional snoring, and over twenty-five percent snore every night. Snoring occurs when there is an obstruction in air flow in the throat, mouth and/or nose. The sound we hear is the result of the tongue or upper throat vibrating against the soft palate and uvula during breathing.

Snoring most commonly occurs in adults, and it usually worsens with age. Chronic snoring can be caused by poor muscle strength in the tongue and throat, resulting in the tongue falling backward and obstructing the throat, excessive throat tissue or soft tissue in the neck or a long soft palate and/or uvula. Snoring can also be caused by stuffy nose from sinus infection, hay fever, or a cold; this type of snoring should go away after recovery from the illness. When children have chronic snoring, it often indicates enlarged tonsils or adenoids or nasal blockage.

Snoring can be the symptom of a more serious condition, such as sleep apnea. When snoring is interrupted by pausing, choking or gasping, sleep apnea is a high probability. Obstructive sleep apnea (OSA) is characterized by episodes of breathing pauses that are caused by collapse of the upper airway. 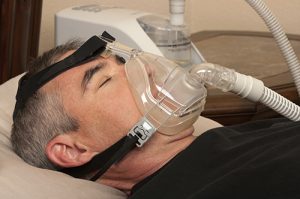 Symptoms of sleep apnea include chronic snoring, morning headaches, memory and learning problems, irritability, depression, mood swings, waking up frequently, bed wetting, dry mouth, sore throat and sleepiness during the day. Sleep apnea disrupts the natural sleep cycle, which causes many of the above symptoms despite having “slept” most of the night.

Home Sleep Testing
In order to diagnose sleep apnea, your ENT may have you conduct an at-home sleep study. At one time, all testing was done in the lab; however, patients have a harder time falling and staying asleep when they are not in the comfort of their own home. Home sleep testing consists of measuring nasal and oral airflow by way of a thin wire taped near the nose and mouth, evaluating respiratory effort by strapping an elastic belt band around the chest and abdomen and using an oximeter figure probe, which is a small clip that attaches to the fingertip and evaluates oxygen levels in the blood.

In Lab Sleep Testing
An in-lab sleep test is an overnight exam that allows doctors to monitor you as you sleep to diagnose sleep apnea or other sleep disorders. You’ll be asked to arrive about two hours before bedtime so the test can be set up. Although you can sleep in your own pajamas, sensors and electrodes will be placed on your head and body to monitor your physical activity during sleep. There will not be other patients in the room.

Good Sleep Hygiene
Good sleep hygiene is important for having quality sleep and feeling rested during the day. The best form of sleep hygiene is keeping a regular schedule for going to bed and getting up in the morning. The amount of sleep needed and the sleep schedule vary greatly from person to person; the most important thing is to be consistent. Some other habits for good sleep hygiene include avoiding naps during the day, refraining from caffeine in the evening, exercising regularly, not eating close to bedtime and using your bed only for sleep.