The process of hearing requires interaction between the ears and the brain. Hearing tests determine whether or not the two are working together, and if not, what exactly needs to be fixed.

Sound waves travel through the ear canal and into the eardrum. These waves move at a certain speed (frequency) and have a certain height (amplitude). Faster frequencies emit a higher pitch, and taller waves produce louder sounds. These characteristics translate to nerve impulses, which then are sent to the brain. This is the process of hearing.

There are many types of hearing tests that determine what kind of hearing deficiency a patient has. Different testing methods are used depending on the patient’s age, the doctor’s concerns and other factors. 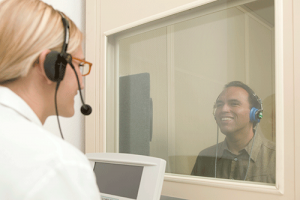 One of the most common hearing testing methods in adults and older children is pure-tone audiometry testing. This test determines what volume of sound a patient can hear at different frequencies. This test is usually conducted with headphones, but sometimes a sound booth is used. The doctor presents a tone through the speakers, and the patient indicates whether or not they can hear it. This test establishes whether a patient is impaired from hearing specifically high or low tones.

A variation of pure-tone audiometry testing is speech testing, sometimes referred to as “whispered speech test.” The concept is the same, except instead of tones, the audiologist will say or play words at quieter and quieter specific volumes to determine at what point the patient can no longer hear soft noises and discriminate between common sounds used in speech.