Although there are many types of hearing aids, the five major styles are completely-in-canal (CIC), in-the-canal (ITC), in-the-ear (ITE), behind-the-ear (BTE) and Receiver-in-the-Ear (RITE). You and your audiologist can discuss which style is best for you in terms of appearance and functionality. 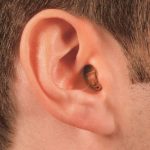 Completely-in-canal (CIC) or mini-CIC are devices that are molded to fit completely inside your ear canal. They are the smallest, least visible models of hearing aid. The CIC does not include directional microphones, which makes the device less likely to pick up wind noise, but also means the device is less effective for those with severe hearing loss. Additionally, the batteries of the CIC are small and may have a shorter lifespan. CIC and mini-CIC devices are best suited for those with mild to moderate hearing loss. 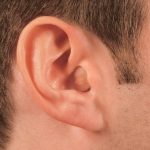 In-the-canal (ITC) devices sit both inside the ear canal and in the concha of the outer ear. The ITC has the same general features as the CIC. The difference is that it is slightly more visible, but the larger size makes for easier handling. The ITC is best suited for those with mild to moderate hearing loss. 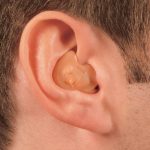 In-the-ear (ITE) hearing aids are the largest custom-made devices. Though they are most visible, they are also easiest to handle and operate. The device has two styles; the full shell fits in the entire concha of the outer ear while the half shell fits only in the lower half near the ear canal. This device can be fit with a volume control setting, which is unavailable in smaller styles of hearing aids like the CIC. The ITE is suitable for those with mild to severe hearing loss. 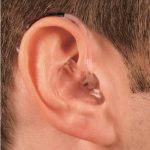 Behind-the-ear (BTE) instruments have separate receivers and sound processors which connect with a clear tube that wraps over the ear. Newer BTE models are small and discrete, and the clear tubing can be shaped to the same size and shape of your ear so as not to be noticed. The BTE device is appropriate for all ages and for those with any type of hearing loss. 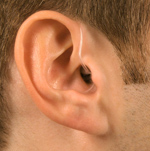 Receiver-in-the-Ear (RITE): A RITE hearing aid consists of a tiny housing containing all electronics except the receiver, which is positioned behind the ear. A thin tube connects the housing to the receiver, which is worn in the concha (bowl-shaped portion) of the ear. It’s a small and discreet unit but powerful enough for treating mild to moderately severe hearing loss.
Request a Visit
Ear, Nose, & Throat Center of the Ozarks