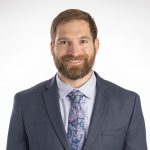 Dr. Sloneker is a native of Northwest Arkansas, graduating from both Springdale High School and the University of Arkansas at Fayetteville before going on to attend medical school at the University of Arkansas for Medical Sciences where he earned honors in research. After leaving UAMS, Dr. Sloneker was commissioned as an officer in the United States Army. He then travelled to Tacoma and Seattle Washington to complete his residency in Otolaryngology-Head and Neck surgery at Madigan Army Medical Center. While stationed at Fort Bragg, North Carolina, Dr. Sloneker was deployed for nine months in Iraq serving as the commander of a head and neck unit.

After nine years in the military, Dr. Sloneker completed a fellowship in Head and Neck Surgical Oncology and Microvascular Reconstruction as well as transoral robotic surgery at UAMS. Dr. Sloneker’s goal is to bring the highest level of head and neck cancer care to Northwest Arkansas.

Dr. Sloneker’s outside interests include spending time with his wife Chelsea and their four children, in addition to camping, backpacking, fly fishing and mountain biking.